SPORTS >> Perssons of interest: No Rivalries within Bears' family 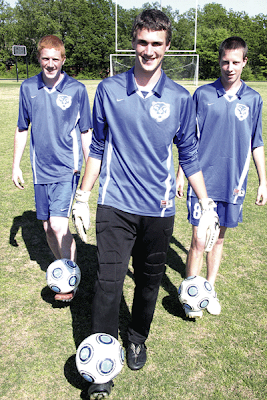 Jacob Persson, left, Philip Persson and Joshua Persson all have vital roles on Sylvan Hills’ soccer team, and will make their third trip to state next month.
By JASON KING
Leader sportswriter

There are a lot of Perssons responsible for Sylvan Hills’ soccer success in recent years.

For Bears seniors Philip Persson, Jacob Persson and Joshua Persson, that success has included back-to-back appearances in the state tournament and one conference championship in their first two varsity seasons.

And for their final run — this year as team captains — the three will most likely lead the Bears into the 5A state tournament as the No. 2 seed from the 5A Southeast Conference after two close losses to league-leading Pulaski Academy.

But those two losses have been the only setbacks for Sylvan Hills (10-2-1).

Forward Jacob Perssons and mid-fielder Joshua are twin brothers who were both named all-conference last year, while goalkeeper Philip is their cousin. But the family connection doesn’t end with Phil, Jacob and Josh.

Philip’s brother Sam Persson has been head coach of the Bears for five seasons while his sister Jody was a standout of the Lady Bears in 2005-06 and now helps coach girls.

Sam Persson, who will also coach sophomore and cousin Jeremiah Persson the next two seasons, said having relatives on the field together is a great benefit when it comes to communication and unselfishness.

“They look for each other,” Sam Persson said. “When the game is on the line, they know they have somebody they can trust, because they’ve worked together so long before. Especially the brothers; they know what each other’s going to do before the other guy does it.”

Jacob led the team with 24 goals last year and has 17 this season, tying him with Joshua for the lead.

“Last year, we had a chance, but it’s actually turned out better for us this year as far as a team,” Jacob Persson said. “We’ve gained a lot more people. A lot of the other players have progressed more than expected. So we’ve actually turned out to be a lot better.”

Jacob has produced more goals than anyone for the Bears in the past two years, but Sam Persson looks to him for much more.

“Jacob is the most natural athlete that we have on the team,” Sam Persson said. “He has skill, he has speed, and he’s left footed, which is a rarity, especially at this level. He can head the ball, he can score the ball, he can pass the ball — he’s got good vision. He’s hard to take down. We would probably get a lot more free kicks if he wasn’t so stubborn about staying up and being direct.”

Sam Persson praises Joshua as the headiest player Sylvan Hills has on the team.

“Josh is probably one of the more underrated players in the state,” Sam Persson said. “He’s not the best athlete on our team, he doesn’t have the strongest foot, but he has a better tactical understanding than anybody I’ve seen play at the high-school level.

“If there’s a spot that needs to be filled on the field, he sees it, and he fills it. When he has to, he’ll take the game on his shoulders.”

Joshua is just as happy to see members of his family in the stands as on the field.

“We get a lot of support from our family,” he said. “They always come to all of our games. It’s definitely not the biggest sport at Sylvan Hills, but we get a fair amount of fans.”

Philip refers to Sylvan Hills’ 3-0 victory over Paragould in the first round of the 5A state playoffs last year, when he stopped a close-range free kick in the final seconds, as his best goalkeeping performance.

“He has the personality traits that you need in a keeper, which is a strong individual personality,” Sam Persson said of his younger brother. “Someone who doesn’t need kudos from other people; he’s self-motivated.

“And he’s fearless, which is important when you’re coming up against the big athletes that tend to be at the forward position.

He’s not afraid to take somebody out.”

All three players plan to attend UALR for two years after high school. From there, Philip plans on transferring to Letourneau University in Longview, Tex., while Jacob and Joshua will most likely head north to the Moody Bible Institute in Chicago.

UALR only has a women’s soccer program, but the Perssons plan to play club soccer until they transfer.

As for the remainder of this season and the brothers’ battle for the scoring lead, Joshua said that takes a back seat to teamwork and victories.

“I mean, we pass each other the ball,” Joshua said.

“It’s not like we intentionally keep the ball from each other or anything. If we win, we’re happy.”
Posted by THE LEADER at 7:44 PM