TOP STORY >> How can you learn here? 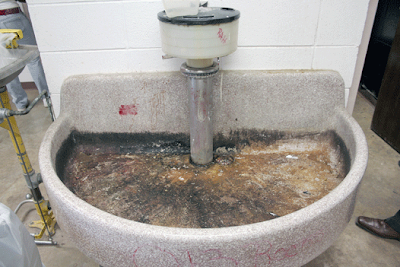 Handwashing station at Jacksonville High School is unsightly and out of order.

Jacksonville High senior Nick Stevens said, “If the school had been maintained, we would have no right to complain. Many of us live in houses built in the 1950s, 60s and 70s, but we keep them clean and maintained.

“If our school was actually cared for and cleaned, we wouldn’t feel so overwhelmed.”

Stevens, a National Merit finalist, said the school, which was built in 1968, has leaky roofs and water-stained ceiling panels.

“There are areas that drip when it rains. The EAST lab is one of the worst.”

He said a couple of months ago the library had some ceiling panels cave in and cause flooding. City inspectors have ordered repairs.

The years of grime and neglect can be seen at the high school on the inside and out.

“Every black spot you walk over is a solidified piece of gum that’s become part of the floor. The lockers are disgusting. A lot of kids won’t use them. They have malfunctions in the doors and locks,” Stevens said.

He said the wooden seats in the auditorium need to be replaced. They are uncomfortable and many are broken. Plastic chairs in the classrooms are cracked and broken as well.

“They can cut you and pinch your clothing,” Stevens said.

As for the school grounds, Stevens described one of the parking lots has a mixture of gravel, asphalt and grass. The area between the picnic tables and the basketball courts is lumpy with cement and bricks half buried in the dirt.

The murals on the school walls were painted by students with supplies purchased by teachers. Stevens said everything that looks nice at the high school is usually paid with student fundraisers or grants.

Many of the bathroom stalls at the school are missing privacy doors and are rusty. Some restroom sinks have no hot water.

Damion Donovan, an 11th-grader, spoke about the conditions in the JHS auditorium. He said the main problem with the auditorium is the way it looks and how it has been treated.

“We have trash in the ceiling we can’t get to. There are broken tiles and the stage feels like it is falling in,” he said.

“The audiobased plug-ins short out and blow speakers. The carpet is disheveled. The seats are uncomfortable and they hurt people. Some are missing screws. You lean back and fall backwards,” Donovan said.

“We don’t have adequate lighting. The curtains and pulley systems don’t work,” he said.

Electricity is a safety concern. Donovan said some kids have been shocked. One student had really bad blisters.

But the high school has received help from the community.

At the high school, congregation members power washed the doors and walls. They raked pine needles and trimmed the hedges along the school building.

Students in an advanced-placement government class have been working for several months compiling data and taking photographs about the deterioration at their school.

They voted to make that the focus of their final project, of which the purpose was to apply higher-order thinking to a real-world problem.

Their teacher, Tracie Rushing, said, “I told the students, ‘You are the leaders of your school and you will be leaders at your universities and communities.’ It was an opportunity to learn how to positively effect change.”

Students decided to go directly to the district decision-makers to make their case. On Tuesday, they made a presentation to the school board. It consisted of photographs and testimonials from faculty and students about the conditions at the school, as well as an analysis of district allocations for capital improvements by geographic zone. The images depicted sagging ceiling tiles, filthy lockers, mold, broken toilets, rodent and insect infestations, exposed wiring, flooding during rainstorms and broken equipment and furniture.

Judging from the influx of visitors to the high school since the board meeting, as well as maintenance workers dispatched there, it looks like the students’ efforts are having the desired result.

The Pulaski County Special School District central office dispatched its director of support services, Gary Beck, to inventory the problems. A couple of school board members dropped by for a tour. Print and television news media went there to see for themselves. Jacksonville Mayor Gary Fletcher visited, and even city code enforcement and the fire department made an inspection of the school on behalf of public safety.

Beck says a lot of what he saw did not shock him, having once been a principal at Jacksonville Elementary School.

“I had a pretty good idea of what it was like,” he said.

But the rodent problem was a surprise to Beck.

Teacher Bonnie Dove said rodents that have infested the space above the ceiling in her classroom are interfering with instruction. She says that the animals may be a health hazard as well.

“While students pay attention to the best of their abilities, rodents crawling over the ceiling and scratching relentlessly makes teaching and learning challenging at best,” Dove wrote. “This is not only distracting, but the health issues are another concern that I am very distressed over. By allowing the rodents to scamper over the ceiling, causing the tiles to bulge as they are moving over them, my students are being exposed to rodent droppings, possible diseases and other unsanitary circumstances.”

Beck says his department can get rid of rodents. He said it is one problem that can be fixed easily, unlike the bathroom renovations, which will cost several hundred thousand dollars.

He can’t promise when that will happen. Others schools are ahead on the list.

“I am very well aware of the bathrooms; they really need to be completely redone,” Beck said. “It just takes time to get to all of these buildings. We are truly under-manned.”

Beck said the dirt and grime at the school bothered him.

“I plan to go out there and visit with the custodial staff,” he said.

Beck said that a few years ago every school in the district lost eight custodial hours per week and the position for district-level supervisor over custodial services was cut to save money.

Supervision of cleaning is now up to the principals. He says conditions got so bad that the school just stays dirty and “you get to the point that is just the way it is.”

He wants to get caught up this summer on some deep cleaning at the high school, once the new roof is on.

“There is a lot of cleaning that could be done over there,” Beck said.
Posted by THE LEADER at 10:53 PM