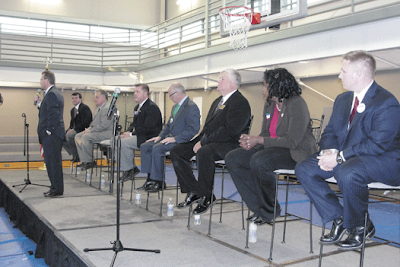 Congressional candidates at a forum at the Lonoke Community Center.

Bryles, a state senator from Blytheville, is a farmer and a businessman. He said education, front and center, is his primary concern, plus economic development and affordable health care. He said he helped create 2,700 new jobs in Mississippi County.

Bryles said “lack of confidence” is the biggest problem, especially with spending out of control. “I would propose a balanced budget amendment,” he said.

Causey, Berry’s chief of staff and recently graduated from law school, said he was raised by a single mom and sacked groceries as a boy. He said he’s most concerned by “the $12 trillion debt, two wars we must win,” and jobs for Arkansans.

“Day one—I would offer an amendment to balance the federal budget,” he said.

He said job creation “right here at home,” was another top priority. Also, we have to be energy independent, using all sources including nuclear.

Cook, a state representative, a retired school administrator and Vietnam War veteran, said he worked on a farm and in the rice fields until he was 18.

“I walked the rice levees with a roll of tar paper,” he said. “I’ve owned three businesses and bring a lot to the table.” He’s lived in seven of the 26 counties in the First District, 13 years in Lawrence County where he was superintendent of Hoxie schools.

Crawford, an Army veteran, rodeo announcer and agriculture reporter living in Jonesboro, says the nation’s on the hook for $56.5 trillion, with interest payments of $340 million an hour. He wants to go to Washington as a citizen legislator who understands how to balance a checkbook.

He says he would remove restrictions on gas and oil drilling on the continental shelf and federal lands and move forward with nuclear energy.

He said unfunded mandates were a huge liability, that Congress spends like drunken sailors, except Sailors spend their own money. He would offer a balanced-budget amendment.

Green, a “small-town bone surgeon” and Marine veteran, was raised in DeWitt. He said he likes rice fields and things that turn green and finds the district a wonderful land to live in, fish and hunt.

“Jobs and deficit spending,” are the biggest problems, he said. “It won’t be solved unless the mothers get their kids up and get them into church on Sunday morning.”

He said he was good at fighting and “I’ll fight for you.”

Ponder, a businessman and educator from Mountain Home, has degrees in communication and Christian studies. “As I travel the 26 counties, I’ve not met anyone who thinks the country is on the right track,” he said. His main concerns are health care, education and telecommunications—broadband.

He said the problem with Congress was “a handful of good kings, too many bad kings and a lack of trust. Corruption is in our own hearts,” he said.

Smith of Wynne is the granddaughter of a share cropper and the daughter of educators. A former aid to Rep. Newt Gingrich, she says she’s got the energy and tenacity to stop spending out of control.

“The citizens are the bosses,” she said. She graduated from Ouachita Baptist University with a degree in political science.

She said the economy would be her top priority. Too much money was paid out bailing out the banks and in stimulus, but nothing had been done for small business.

Wooldridge, a Jonesboro resident and former state senator, became executive director of the Arkansas Association of Public Universities in 2007 and is vice president of a medical foundation.

“The best stimulus is a good job,” he said.

“Job creation is absolutely number one. We have to create 35 million new jobs.”
Posted by THE LEADER at 11:26 PM